Let's say your customer calls and complains somewhere along the lines of My phone is ringing, it's showing number 100 (or some other strange number) and when I pick up, there's nobody there(or there's complete silence)! I've had enough of these calls, please make them stop!

If you hear something similar from your customers, it means they're experiencing what's typically known as ghost calls or phantom calls. These calls are not placed or routed by the VoipNow system. They are placed on your customer's phones straight from the Internet, completely bypassing VoipNow. These calls are possible either because of a poorly configured auto dialer or due a SIP scanner trying to find vulnerabilities in phone networks for fun or for profit.

What are ghost calls

To better understand what ghost calls are, let's take a look at the two paths that the calls to your customers' phones may take. 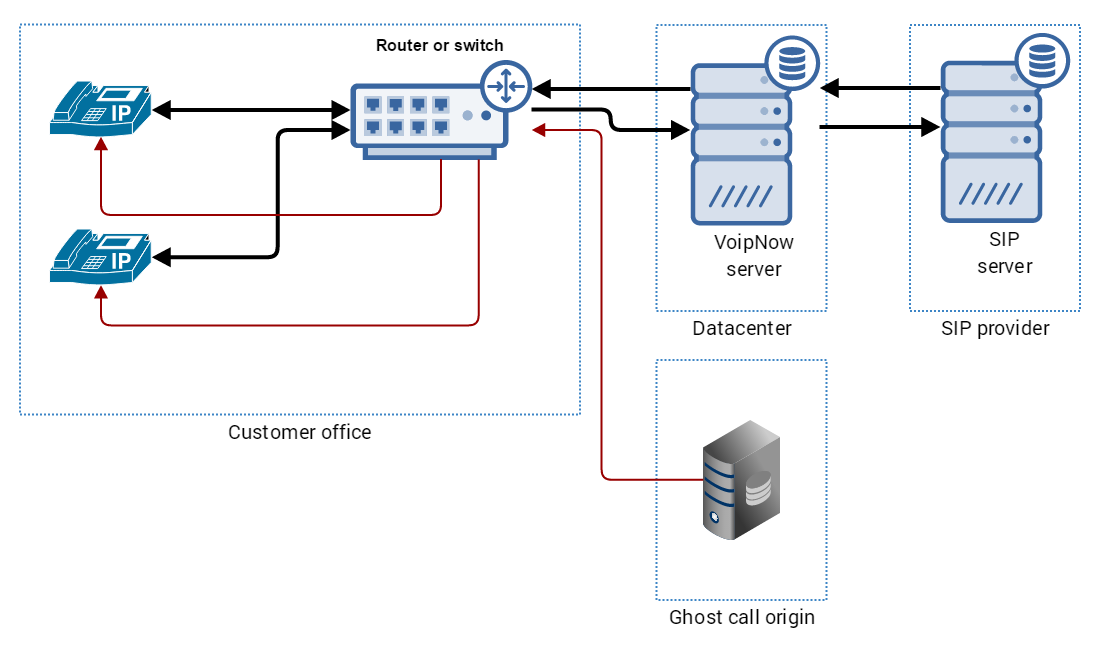 The black arrows indicate the regular call traffic: your customer's phones are connected to the router/switch installed in the office, then to the VoipNow server which in turn connects to the SIP provider's server.

The red arrows indicate the path of a ghost call, which bypasses the SIP provider's server and the VoipNow server entirely. Instead, the call attempt is targeted directly to your customer's router or directly to the customer's phones (if they're directly connected to a public network). It's easy to see that nothing can be done on the VoipNow server or on the SIP provider side in order to block these calls.

The good news is that your phones and network are not at risk as long as your phones' firmware is updated to the latest version available.

Don't forget that each SIP phone is basically a small computer; its software can have bugs and some of them may be critical causing the phones to crash or allowing phantom calls to be redirected to a premium destination, for which you will be charged.

How to block SIP calls in the customer's location

There are three ways in which you can block such calls: